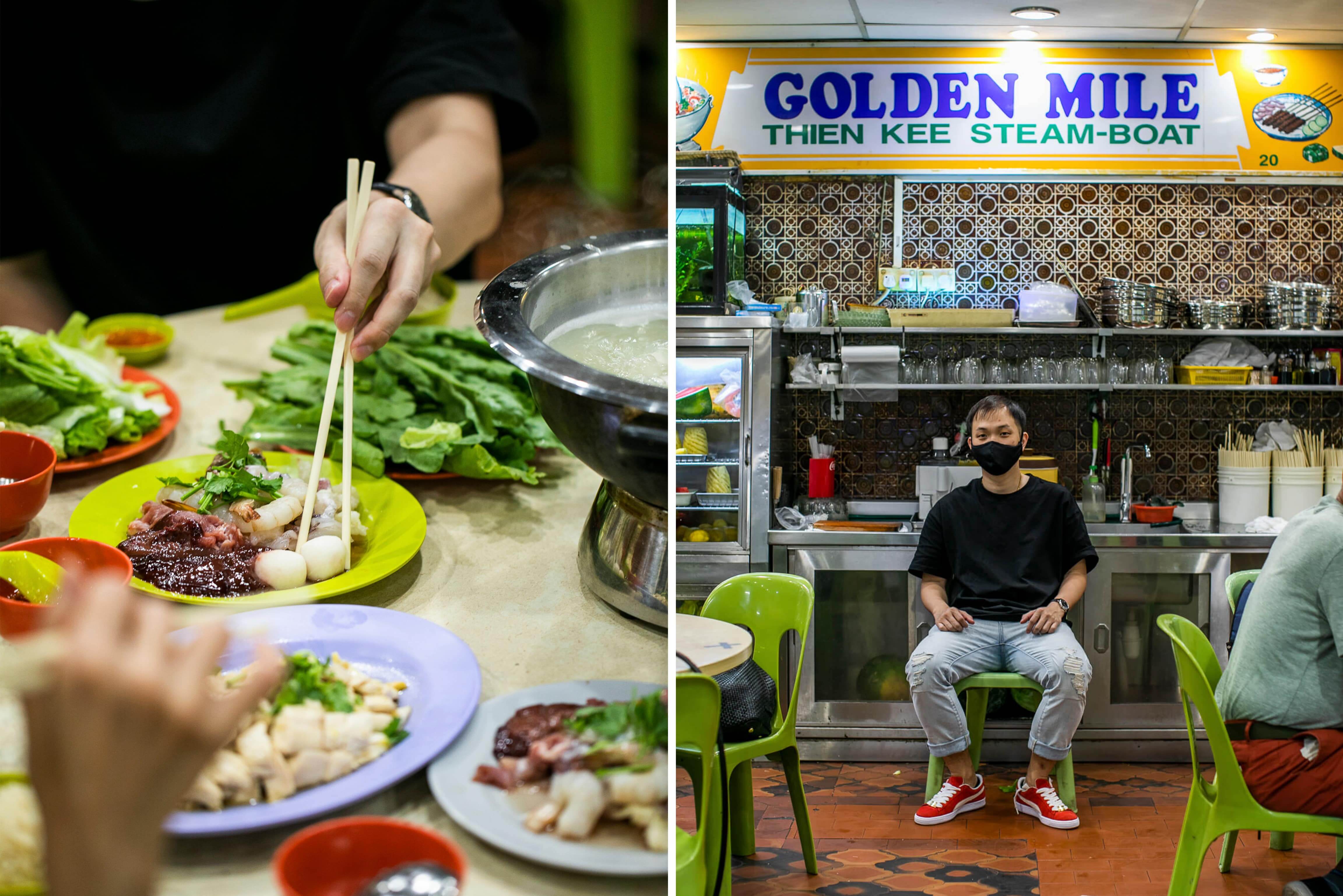 Ignoring the complex’s collection of shops, he heads straight to the basement where the time-warped Golden Mile Thien Kee Steamboat resides in an isolated corner, doling out steamboat and Hainanese-style chicken rice from an expansive space as it has been since 1952. “From the age of two till about 11, I used to stay in one of five blocks of Housing Development Board flats across the road,” reminisces Tay. Back in the day, this old-school venue was a celebratory restaurant for Tay and his family who would come to feast on the unlikely combination of chicken rice and steamboat for birthdays and Chinese New Year. The restaurant’s steamboat offering – think raw seafood, meat and vegetables cooked in a bubbling chicken soup hotpot – is homely and traditional, while Thien Kee’s chicken rice helped shape the version Tay serves at Colony. “I like the way they poach the chicken,” says Tay who still visits the stall once or twice a month. “The chicken is immersed into just-boiled water, the lid is closed and the fire is turned off so that the residual heat of the pot slow-cooks the chicken to yield a tender texture.” The fluffy and mildly flavored chicken rice is also a standout. The secret, says Tay, is the way the cook lightly sautés the ginger, shallots and garlic until fragrant but not overly caramelized before adding the rice and chicken stock. This basement diner isn’t the only local restaurant to have influenced Tay’s cooking. When it comes to the crustacean noodle soup with Boston lobster served as part of Colony’s Friday and Saturday night festive seafood dinner menu, Tay takes a leaf out of the book of his favourite prawn mee stall, River South (Hoe Nam) Prawns Noodles. During his teenage years, Tay would visit the stall after school for his weekly fix of pork rib and big prawn noodles. (The version he orders features yellow noodles and thick rice vermicelli in a soup). 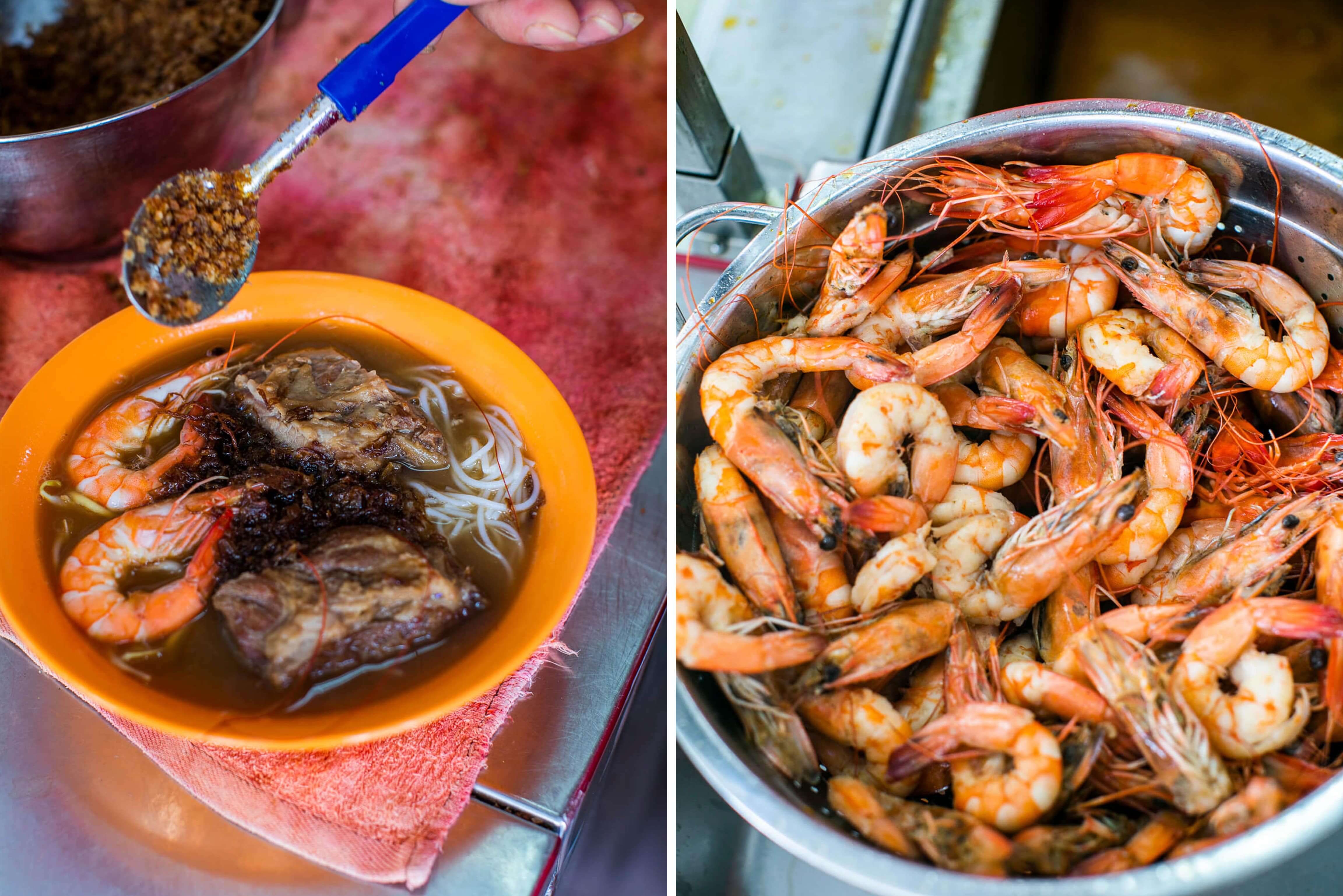 “In my youth, I hung out a lot in the Macpherson neighborhood as my school was nearby,” Tay says. With a sheepish smile, he also confessed that his favourite billiard shop at the time was also in the same area. While the billiard shop is no longer, Tay’s affection for the prawn noodle soup served in this long-standing stall remains evergreen with the chef still making twice-monthly visits. The key to the noodles’ deliciousness, says Tay, is the rich and savoury soup base made using pork bones and prawn shells. The broth has been cooked the same way since the stall’s inception in 1971 and Colony’s version follows suit, albeit with the luxe addition of lobster shells to the stock.

While the prawn mee is delicious as-is, Tay likes to eat the noodles with crisp-fried ngoh hiang and enjoy the two dishes’ contrasting textures. Hokkien for “five spice”, ngoh hiang refers to five spice-flavoured fried foods served by a Teochew or Hokkien vendor. (Typically, these dishes are flavoured with a mix of cinnamon, clove, star anise, pepper and fennel seed). Tay’s favourite versions are from a heritage Teochew hawker stall, Lao Zhong Zhong Five Spice, conveniently located across the road from Hoe Nam. Said to have started in the 1950s, Lao Zhong Zhong moved several times before it settled at its current location in 2007. While its location has changed multiple times, the hawker still makes his fried goodies by hand. Reminiscing on his teenage days, Tay says that he would take away two items – fried prawn cracker and fried prawn head cake with either hard-boiled egg or beancurd – plus a sweet chilli dip topped with crushed peanuts and chopped onions as an accompaniment to his prawn mee. It’s a ritual he still follows today. This habit of playing with textures also carries through to Tay’s cooking. At Colony, he uses crisp fritters to add crunch to fresh wrapped popiah, while strips of dried bean curd skin adorn the restaurant’s seafood laksa. These details might be small, but they’re delicious and – even if diners don’t realise it – a way for Tay to share childhood memories with guests.

Diners can taste dishes inspired by these restaurants at Colony at The Ritz-Carlton, Millenia Singapore.