Try and imagine the pressure. You're just 26 years old and are asked to cook a 60th birthday dinner for 14 guests. The birthday boy in question? One of the greatest chefs of the 20th century, French maestro Joël Robuchon. The other guests? All chefs, holding more than two dozen Michelin stars between them.

Today, as we stand in a fish market in Hong Kong, Chef Angelo Agliano reflects on what the frankly terrifying experience meant to him: "I learnt that there was no point in overthinking. All you can do is what you know best, executing it to the best of your ability." It's a philosophy that has defined him ever since that extraordinary dinner and reflects the humble brilliance which has seen him awarded Michelin stars throughout his career, including at Tosca di Angelo, 102 floors up at The Ritz Carlton, Hong Kong. 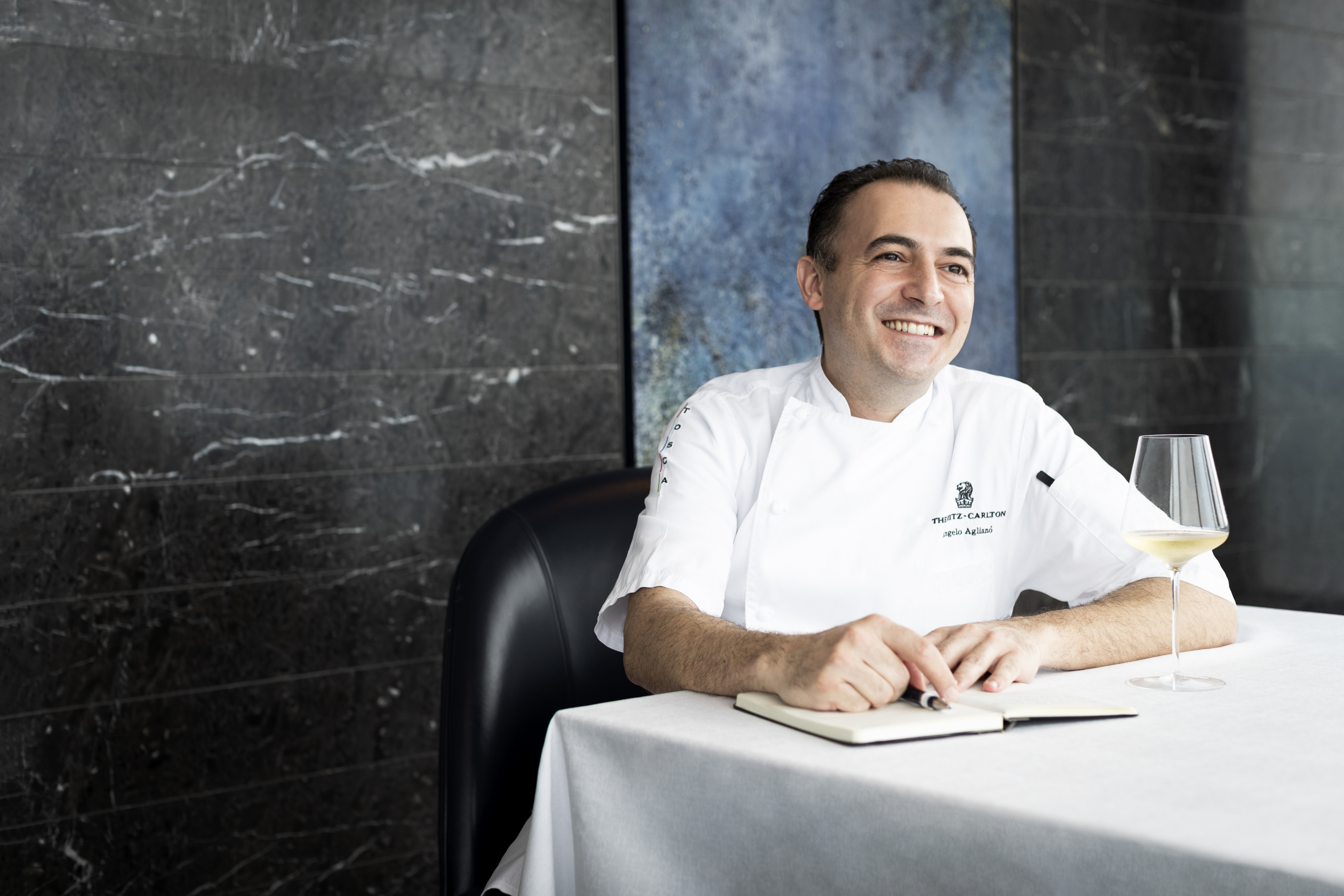 We're in a chilly, not-so-fragrant surrounding of a fish market because Agliano loves to see the freshest catch in front of him, inspecting the produce with a keen and extremely knowledgeable eye. That's because he hails from Siracusa on the beautiful east coast of Sicily, where he grew up the son of a fisherman. Consequently, Hong Kong's obsession with seafood makes him feel right at home - and also influences his menu.

He loves Mediterranean turbot and sea bass, but is equally a fan of star grouper, a fish from the South China Sea beloved by Hong Kong gourmands. In Cantonese, it gets its name from the blue spots which resemble stars in the night sky. Chef has even been known to hire a boat with friends and hit the waves off Hong Kong, following in his father's footsteps in search of fabulous fish. When it comes to crafting the fruits of the sea into fabulous dishes, he explains that trying to do something simple is much more difficult than something complicated. Just don't ever expect him to say that he 'created' a dish:

"Everything was already created! We just respect and balance the ingredients. An artist who paints a picture, a singer, they create. We use our knowledge of ingredients and techniques to bring together things that were already created, in our way and with our identity."

To prove his point, he explains how his fabulous take on tuna tartare is influenced by his homeland - but also by his time in Asia: "The aubergine puree on top is totally, traditionally Italian. I use Sicilian aubergines, cook them but then I marinate them for 24 hours in mirin, sake and soya sauce. That softens it further, then I add a gastrique, a classic Sicilian sauce which has sweet and sour notes that we call 'agrodolce'. It's simple, but in its simplicity there's a lightness. I adore this dish" Tuna with Aubergine and Caviar Likewise seafood is the star of another stunning bowl that he simply calls 'My fish soup'. Why 'my'? "Because it's Sicilian ingredients - capers, oregano, pacchino tomato, olive - but the stock is made from the head and the bones of the red star grouper, a very important fish to people in Hong Kong. We also steam the fish in bamboo with water flavoured with jasmine tea, fennel seeds, cloves, star anis, cardomom."  It's the perfect example of his cuisine, simply marrying the finest ingredients with influences from cultures that he knows, loves and respects.

As for the outcome of that 60th birthday dinner? His risotto with Taleggio cheese was so good that it bought Joël Robuchon to his feet - and then he started clapping. The other chefs joined him, resulting in a standing ovation which moved Agliano to tears. Tasting his fabulous cuisine at Tosca di Angelo, diners may well find themselves in a very similar situation.