Over the Moon: How Lunar New Year is Celebrated Around Asia Asia, it needs to be said, knows how to party. While the rest of the world spends January recovering from New Year’s Eve festivities, many countries in Asia gear up for round two and prepare for lunar new year, the start of the new year according to the lunar calendar. And like the western new year, these lunar new year celebrations involve plenty of revelry, cheer and feasting - only with a lot more of the colour red.

Although these celebrations can last up to two weeks, the first three days are generally regarded as the most important. Businesses often close during this period as people travel to hometowns and play their part in one of the great modern-day human migration exercises. While common themes unite Asia’s major lunar new year celebrations – family reunions, paying respects to ancestors, warding off evil spirits – every country and culture lays claim to unique traditions and practices. Lion dances. Exploding firecrackers. The clamour and chatter of families coming together for the all-important reunion dinner: all signs (and sounds) synonymous with Chinese New Year. The best known of all the Asian lunar new year celebrations, Chunjie (Chinese New Year) is a 15-day festival filled with customs, merriment and the preparation and enjoyment of symbolic dishes including dumplings, nian gao (new year cake), and ba bao fan (eight treasure rice pudding). Across China, Marriott Bonvoy chefs have drawn inspiration from regional cuisines and prepared special festive dishes: at Marriott Nanjing South Hotel, chef Zhou Songzhu is celebrating Huaiyang cuisine by serving stewed fish head. Family feasting is the name of the game at W Hotel Suzhou where guests can enjoy a deluxe lunar new year poon choi, a traditional casserole dish made by arranging layers of ingredients. The Ritz-Carlton Pudong, meanwhile, is offering a soup made with Yunnan matsutakes, some of the most treasured mushrooms on the planet. 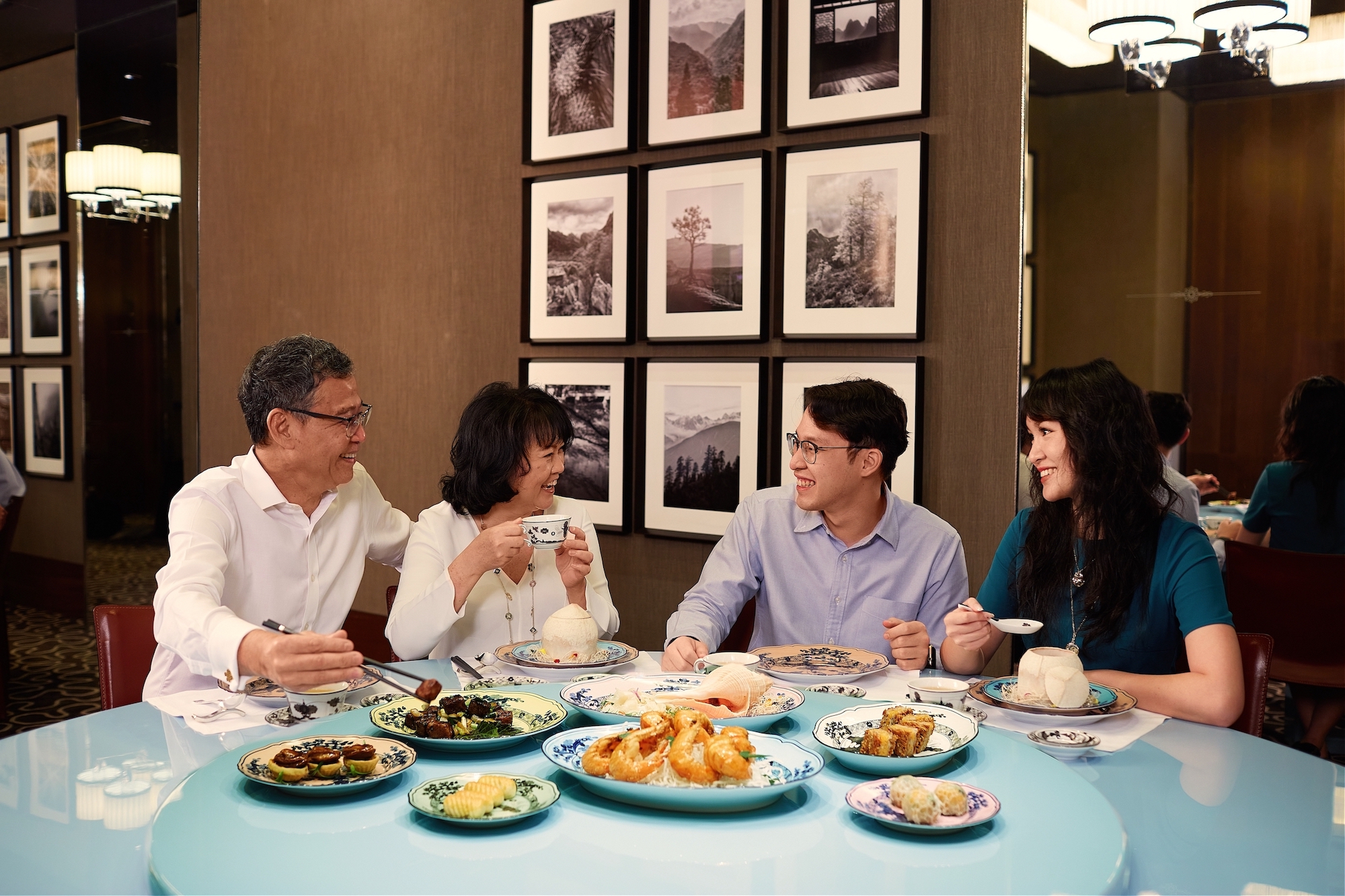 Dining with family at Summer Pavilion, The Ritz-Carlton Millenia

Not just a major event in China, Chunjie is celebrated throughout the world by the global Chinese diaspora. Countries with large Chinese communities such as Thailand and Indonesia, in particular, go big on Chinese New Year festivities. In some instances, recent lunar new year traditions and dishes – the modern yusheng (prosperity fish toss salad) that evolved in Malaysia and Singapore, for instance – have been embraced as universal Chinese New Year practices. Some restaurants take things a step further: In Singapore, at The Ritz-Carlton Millenia’s Michelin-starred Cantonese restaurant, Summer Pavilion, guests can welcome in the lunar new year with a deluxe yu sheng starring Canadian lobster and black caviar. At any given time, Ho Chi Minh City and Hanoi are a rush of colour and sound. During Tet (Vietnamese New Year), this sensory overload finds another gear as Vietnam’s two largest cities – as well as towns and villages throughout the country – prepare to usher in the lunar new year. Homes are beautified with fruit trees and flowers according to regional preferences and whatever’s growing locally. Some reach for peach, apricot and stone fruit blossoms. Others place their faith in marigolds: a symbol of health and longevity.

Traditionally, the first three days of Tet were designated for different purposes. Day one was set aside for immediate family; day two was all about visiting friends; and day three was reserved for catching up with teachers and mentors. Good eating, however, is a constant theme. Traditional Tet foods include mut (candied fruits), banh chưng (pork, mung beans and glutinous rice wrapped in dong leaves) and Vietnamese sausage. Guests staying at JW Marriott Hanoi or JW Marriott Phu Quoc Emerald Bay during Tet can learn how to make banh chung, paint dong ho (traditional woodcut paintings) and other traditional activities. For those that’d prefer to have a more leisurely lunar new year celebration, consider booking in for the Cantonese feast at John Anthony, the lobby restaurant at JW Marriott Hanoi. After not being observed for almost 80 years, Seollal (Korean New Year) celebrations were reintroduced in 1989. Although Korea has a reputation as an upwardly mobile, cutting-edge country, Seollal rituals afford glimpses of the country’s past. Hanbok (traditional clothing) is worn during the country’s three-day lunar new year celebrations and traditional games are played: check out the family-friendly Yut-Nori with Black Tiger package at JW Marriott Hotel Seoul that includes all the pieces required to play the classic Korean board game including tokens from the hotel’s pastry team, plus two glasses of Black Tiger Guinness, a drink created by the bartenders at MOBO bar.

Symbolic dishes are also offered to ancestors and shared with family. Some of the dishes commonly served as part of a traditional Seollal feast include tteokguk (soup with sliced rice cake), jeon (savoury pancakes) and japchae (glass noodles with vegetables). Once upon a time, these dishes were cooked at home, but many Korean families nowadays go out to celebrate Seollal. JW Marriott Dongdaemun Square Seoul’s JW Holiday To-Go service brings the restaurant experience to diners’ homes via chef-prepared versions of galbijim (braised beef short ribs), bulgogi and other traditional Seollal dishes.

The above, of course, are just a handful of the ways that Asia celebrates the lunar new year. Some believe that bigger is best, while others like keeping things casual and low-key. However you choose to mark the beginning of a (lunar) new year, Marriott Bonvoy chefs and restaurants are on hand to help ensure the Year of the Tiger starts off in the best way possible.