BACK TO R+B Bangkok

Nest in the City: Bangkok's Delicious and Sustainable Culinary Escape His chef's apron is dark olive green, while outside the doors of IGNIV Bangkok by Andreas Caminada, tropical plants could make diners forget that they're in the heart of the Thai capital.

It's the perfect colour scheme for Swiss-born Head Chef David Hartwig, someone for whom sustainability has been in the DNA long before it became a trend. Growing up in Zurich, his parents were biologists, meaning that he was exposed to a variety of plants a very young age. Even before that, his grandfather grew up in a farming family, so fresh, sustainable produce has always been important, both at home and in his professional life.

"I started on my culinary journey with an apprenticeship in a small family hotel in Switzerland's Engadin Valley which focused on sustainability and zero-waste, long before they became buzz words in the industry. But it was when I joined the 3-Michelin-starred restaurant Schloss Schauenstein in Switzerland that I really understood the depth of sustainability. Working with IGNIV´s founding Chef Andreas Caminada taught me that sustainability not only affects food but is a whole philosophy of how you run a business." Although only 29, Hartwig's resume has also included time working in highly acclaimed and Michelin-starred restaurants including Maaemo in Oslo as well as The NoMad Hotel and Wallsé in New York. His exposure, learning and dedication to his craft ensured that he was handpicked by Caminada to run IGNIV at The St. Regis Bangkok.

IGNIV means ‘nest’ in Romansh, a native Swiss language that is Chef Andreas’s mother tongue. It's the perfect name for the sharing-style fine dining experience, as guests connect with the food but also with each other.

"I think at the core of IGNIV is Andreas Caminada’s vision of creating a cuisine that highlights top-quality ingredients through cooking techniques, flavour profiles and balance of seasoning. Bangkok is IGNIV’s first foray outside Switzerland, and I think it will take time until we can really say we have our own unique DNA and identity – I like to think it’s like a child finding their way through experiences, developing their own character." It's a charming and modest way to describe his philosophy, while his cuisine has already wowed Bangkok diners since the restaurant opened in October. That's thanks in part to his joy and creativity in the country's remarkable diversity of produce, much of which at IGNIV Bangkok is sourced from the Origin Farm in Chiang Mai in northern Thailand. Indeed, Hartwig's face lights up with excitement as he explains why his Tomato Dill dish has already proven very popular with guests:

"It's made out of six different types of tomatoes grown at the Origin Farm in Chiang Mai, where we rent our own farming land and specify what we want to be grown there. The dish features semi-dried Roma tomatoes, dried beef tomatoes, dried cherry tomatoes, fresh green, yellow, black, and oxheart tomatoes. With the food scraps we make a dressing and we garnish with dill cream, made from pickled dill flowers and dill oil, made from herbs also grown for us in Chiang Mai." 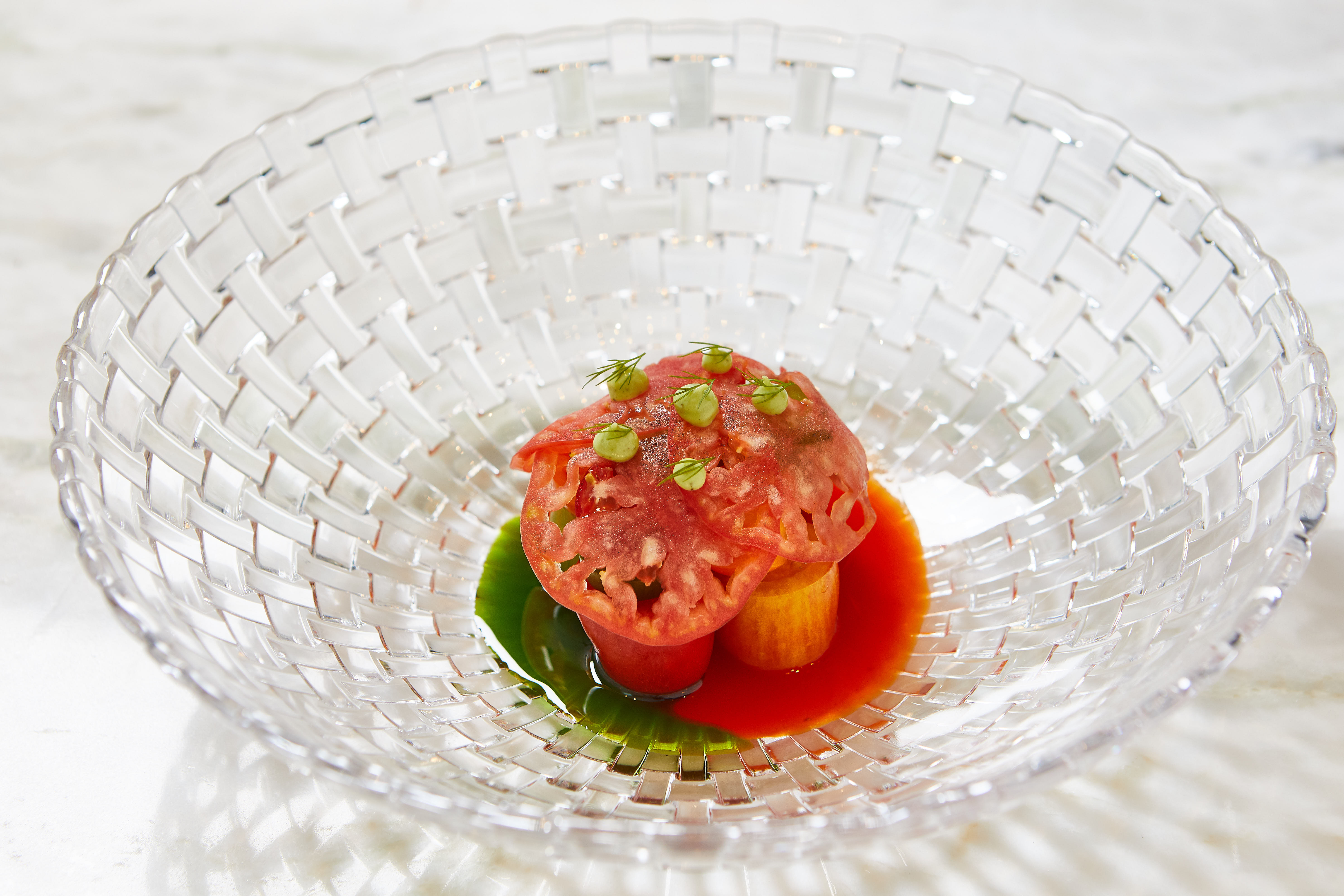 The balance of freshness, flavor and texture makes for a sublime combination, but Hartwig again stresses that the success is down to the stellar ingredients: "Basically we took an incredible product and played with the texture to make it more interesting, but we changed as little as possible in the taste. Generally speaking, by choosing to work with great products, chefs don’t need to change flavours – we can let them shine in their most natural and original way. It takes time to really understand and live through the seasonality and availability of produce, and to acquaint ourselves with the farming community in Thailand."

Ultimately, there's an even greater sense of purpose behind Hartwig's mission at IGNIV. He's not just content with crafting stunning Michelin-worthy menus and confirming the St. Regis Bangkok's reputation as one of Thailand's most exciting culinary destinations - he also wants to inspire others to use the produce he loves:

"The Bangkok food scene has drastically evolved with the boom in organic produce. By choosing to source locally, we then have to explain where our ingredients come from and why we are confident in serving them. We are committed to supporting local organic farmers and producers and I think that big hotels and well-known restaurants have a big impact in the market in terms of media presence and adjusting perceptions."

IGNIV Bangkok is open from Wednesdays to Sundays for lunch and dinner. For more information or reservations, contact [email protected] or +66 (0) 2 207 7822 All Aboard Bangkok's Newest Landmark on the Mighty River of Kings: Sirimahannop